Bostonians were the first to celebrate St. Patrick’s Day in North America. On March 17, 1737, as a gesture of solidarity among the city’s new Irish immigrants, Boston’s Irish community joined together in festivities of their homeland and to honor the memory of the below Patron Saint of Ireland. Banquets and parades to celebrate the occasion became common, with Boston’s early St. Patrick’s Day Parades occurring downtown by the Ancient Order of Hibernians.

In 1901, the parade moved to South Boston, a neighborhood that was not only home to a robust Irish community, but was the site of Dorchester Heights, where the evacuation of British troops from Boston on March 17, 1776 was made possible and is commemorated. Given the significance of both the St. Patrick’s Day and Evacuation Day holidays, the parade came to honor both. Starting in 1901, the annual parade became a dual-hatted celebration of St. Patrick’s Day and Irish heritage, as well as military service and the commemoration of Evacuation Day. Each year, the parade occurs on the Sunday closest to March 17th, with a commitment to keeping alive the tradition of honoring heritage and service. 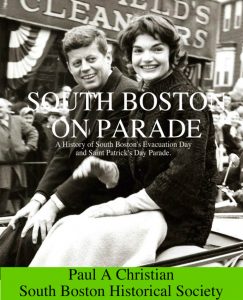 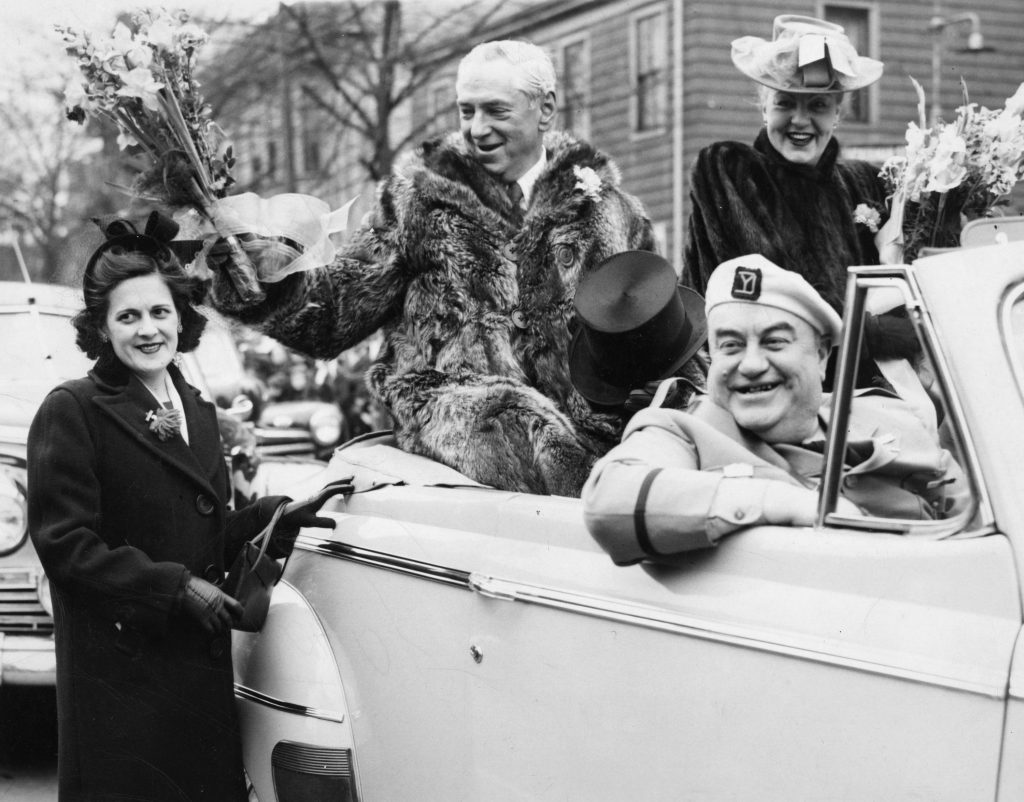 March 17 1947 / fromthearchive / Globe Staff photo by Ed Farrand / Mayor James Michael Curley, dressed in his raccoon coat, hands out flowers during South Boston’s traditional Evacuation Day parade on March 17, 1947. Mayor Curley’s wife, Gertrude, in a smart green hat with a pink ribbon is sitting to his left and Edward J. “Knocko” McCormack in his Yankee Division uniform is in front. The parade originally commemorated the day the British left Boston on March 17 1776 and now it also honors St. Patrick, the patron saint of Ireland.

THE HISTORY OF SAINT PATRICK

St. Patrick of Ireland is one of the world’s most popular saints. He was born in Roman Britain and when he was fourteen or so, he was captured by Irish pirates during a raiding party and taken to Ireland as a slave to herd and tend sheep. At the time, Ireland was a land of Druids and pagans but Patrick turned to God and wrote his memoir, The Confession. In The Confession, he wrote:

“The love of God and his fear grew in me more and more, as did the faith, and my soul was rosed, so that, in a single day, I have said as many as a hundred prayers and in the night, nearly the same. I prayed in the woods and on the mountain, even before dawn. I felt no hurt from the snow or ice or rain.”

Patrick’s captivity lasted until he was twenty, when he escaped after having a dream from God in which he was told to leave Ireland by going to the coast. There he found some sailors who took him back to Britain and was reunited with his family.

A few years after returning home, Patrick saw a vision he described in his memoir:

“I saw a man coming, as it were from Ireland. His name was Victoricus, and he carried many letters, and he gave me one of them. I read the heading: ‘The Voice of the Irish.’ As I began the letter, I imagined in that moment that I heard the voice of those very people who were near the wood of Foclut, which is beside the western sea-and they cried out, as with one voice: ‘We appeal to you, holy servant boy, to come and walk among us.’”

The vision prompted his studies for the priesthood. He was ordained by St. Germanus, the Bishop of Auxerre, whom he had studied under for years, and was later ordained a bishop and sent to take the Gospel to Ireland.

Patrick arrived in Slane, Ireland on March 25, 433. There are several legends about what happened next, with the most prominent claiming he met the chieftain of one of the druid tribes, who tried to kill him. After an intervention from God, Patrick was able to convert the chieftain and preach the Gospel throughout Ireland. There, he converted many people, eventually thousands, and he began building churches across the country.

He often used shamrocks to explain the Holy Trinity and entire kingdoms were eventually converted to Christianity after hearing Patrick’s message.

Patrick preached and converted all of Ireland for 40 years. He worked many miracles and wrote of his love for God in Confessions. After years of living in poverty, traveling and enduring much suffering he died March 17, 461.

He died at Saul, where he had built the first Irish church. He is believed to be buried in Down Cathedral, Downpatrick. His grave was marked in 1990 with a granite stone.

Patrick was a humble, pious, gentle man, whose love and total devotion to and trust in God should be a shining example to each of us. So complete was his trust in God, and of the importance of his mission, he feared nothing, not even death.

“The Breastplate,” Patrick’s poem of faith and trust in God, reads:

THE HISTORY OF EVACUATION DAY

25-year-old Colonel Henry Knox unbelievably moved 59 cannons 300 miles from Fort Ticonderoga to Boston. On the night of March 4, 1776, with wagon wheels wrapped in straw to muffle the noise, the cannons were strategically put on Dorchester Heights overlooking Boston Harbor. The next morning, British troops were shocked.

Thursday…being set apart by…this Province as a day of fasting, prayer and humiliation, ‘to implore the Lord and Giver of all victory to pardon our manifold sins and wickedness, and that it would please Him to bless the Continental army with His divine favor and protection,’ all officers and soldiers are strictly enjoined to pay all due reverence on that day to the sacred duties of the Lord of hosts.

On March 17, amidst a violent storm, British General Howe evacuated his ships and 3,000 men from Boston. General Washington wrote to his brother, John Augustine Washington, March 31, 1776:

Upon their discovery of the works next morning, great preparations were made for attacking them; but not being ready before the afternoon, and the weather getting very tempestuous, much blood was saved and a very important blow…prevented. That this most remarkable Interposition of Providence is for some wise purpose, I have not a doubt.