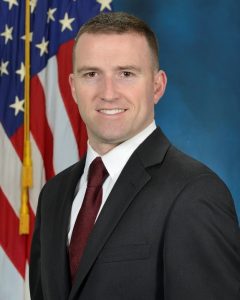 David Falvey, a South Boston resident, is the Commander of the South Boston Allied War Veterans Council, a position he was elected to upon joining the council in June of 2017. He joined the council as a part of a wave of new veterans that sought to re-energize and bring pragmatic leadership to the council and to the South Boston St. Patrick’s Day / Evacuation Day Parade. David also serves as an active member of Thomas J. Fitzgerald VFW Post #561 in South Boston.

In addition to his volunteer efforts in South Boston, David works as an Acquisition Program Manager for the U.S. Air Force at Hanscom Air Force Base, MA, assigned as the C4I Capabilites Team Lead for the FMS Division within the Air Force Life Cycle Management Center’s Battle Management Directorate.

David also serves as a Major in the Massachusetts Army National Guard, branched as a Military Police officer and is currently assigned to Hanscom AFB as a Plans Officer in the G-5 Strategic Planning Section at Massacusetts Joint Force Headquarters. During his 18 years of military service, he has two overseas deployments, both of which occurred as a member of the 972nd Military Police Company of Reading, MA. In 2007-2008, he served as a Platoon Leader during the company’s deployment to Iraq in support of Operation Iraqi Freedom and in 2012-2013, he commanded the 972nd during its deployment to Qatar in support of Operation Enduring Freedom.

US Army Military Police Regimental Order of the Marechausee (Bronze)

Association of the First Corps of Cadets