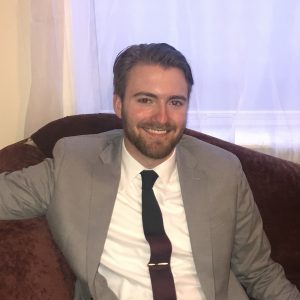 Sergio Bento, a first generation American born and raised in Taunton Massachusetts, is the Marketing/Special Projects Director of the South Boston Allied War Veterans Council, a position he has held since August of 2018. He joined the council as a junior at Suffolk University studying Marketing and Global Business, and is expected to graduate in May of 2020, with an intent to pursue a graduate degree in the Fall of 2020.

For the 2019 parade, Sergio was assigned the role of rebooting the ‘Mayor of Southie’ fundraising initiative that was the council started in the 1990’s for the parade, but was eventually discontinued. Sergio managed and promoted the three candidates for mayor to the council and parade’s online community. By the end of the fundraising campaign, the Mayor of Southie initiative yielded roughly $35,000 that went towards parade operations. Sergio was also put in charge of promoting parade sponsors to provide the local community awareness of which business support the parade and to also increase brand awareness for them.

For the 2020 parade Sergio has seen an increase in responsibilities. Sergio has been tasked with expanding and managing the internship program, which yielded a new social media coordinator and new public relations coordinator. Sergio also developed a personalized, interactive Google Map for the parade’s social media followers that displays where the location of key sponsors in and around Boston, with the purpose of reciprocating the support the council receives rom key sponsors, providing them the spotlight they deserve. Sergio also works with our new social media intern to reboot our online presence to create more creative and interactive content, and recently established a LinkedIn account for the council to boost networking initiatives.